Finally, Shock Jocks is out!

“Shock Jocks is a competitive fast-paced two player game played on the iPad. Players go head to head to force their opponent to lose control of the ball, causing them to sacrifice lives to keep playing until they have none to spare. Each player controls two sparks with their fingers, which can be placed and dragged anywhere on their side of the playfield. With those sparks, players create an electric stream that is used to deflect the ball to their opponent’s side of the field. However, the larger they make their stream when they hit the ball, the more energy they will be using, and they will have to recharge their energy more often. By being aware of the energy you and your opponent are using, you can best your rival in this electrifying e-sport.”

I love how the ball makes the grid ripple: 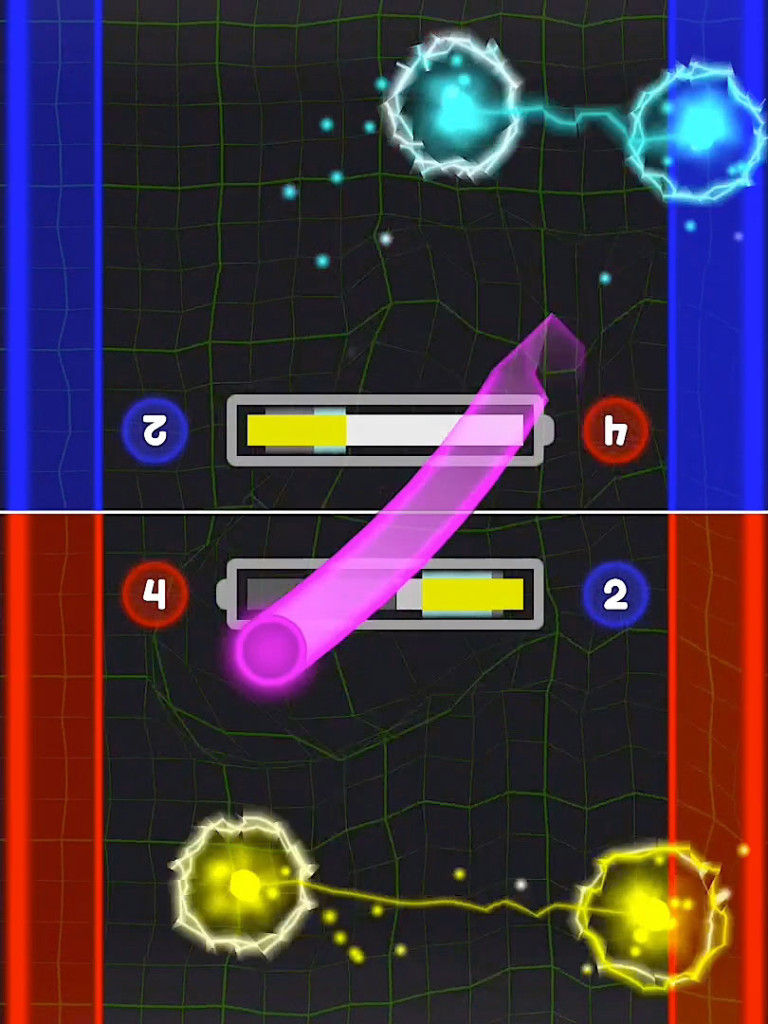 I had a lot of fun with the music and sound effects. I spent a lot of time listening to CBS and NBC football themes, borrowing certain harmonic and melodic devices for a sense of earnest heroicism, dressing them up with electronic, bitcrushed sounds to give a sense of the game taking place in a crackling, buzzing, Tronlike world.

The hardest part was understanding the tone of the game. There isn’t a storyline that says, “OK, now the player is happy, now the player is sad.” And there’s also the local multiplayer problem: when one player is winning, the other player is losing, but they are both hearing the same music and sounds. The best way to resolve this minor dilemna was to imagine two buddies sitting across from each other, having themselves a good time and congratulating each other’s play. So while one person may have just been scored on, he or she is happy their friend executed a challenging manuever or clever tactic. At that point the music is about having fun, friendship, and the joy of competition, and it basically writes itself.

In April of 2013 I participated in the QUILTBAG game jam at MIT and we produced a fun little unicorn jousting game. We decided to polish it up and release it for free on iPad and Android. I loved working with this team: Patrick Rodriguez doing game design, Brian Kokernak doing programming, and Mariah Almeida doing graphics. This Google Play review from user Matt Sample was very gratifying to me: “This app is a testament to my individual value. I was drinking and jousting with my boyfriend behind closed doors before, but now I know we are not alone. It gets better (ish). We’re here, we’re queer, let’s joust to it.”